The Science of Rainfall Simulation

Australia is the driest continent in the world.  Much of its agricultural land is prone to unpredictable rainfall which has an annoying tendency to fall as soon as the spray rig enters the paddock!  Even then it is often not a good soak but an intermittent drizzle, which leaves us confused about whether or not a product sprayed will be washed off wasting time and money.

Most foliar applied, agricultural chemical products are designed to either remain on the surface of leaves or to penetrate into  them; this does not happen instantaneously.  For example, glyphosate takes many hours before the active is safely inside the plant and protected from the elements. While chemicals remain on a leaf surface they are vulnerable to being washed off by rain.

Field trials on the effects of rainfall are notoriously variable and can be a waste of money.  Once Eureka! measured rainfall from a single shower on 26 x 20m plots of a field trial in the Victorian Wimmera using 5 individual rainfall collectors per plot (130 in total). The difference between individual collectors was an astounding 31%, with the lowest being 7.0mm and the highest 9.2mm. As a result of this study we designed and built a rainfall simulator improving on the best we could find around the world. The design is crucial as most rainfall simulators suffer from unacceptable variability and the ‘rain’ has a much lower impact energy than what is measured in the field.

Eureka!’s simulator has a 2.5m x 1.2m x 0.4m tank that has 3,500 hypodermic needles inserted in its base. The tank has a continuous water fill system and eight vertical drainage slots that allow the pressure head of the water to be accurately controlled. The pressure head determines the rate of rainfall so the operator can control the amount of rain delivered per minute/hour. As the water passes through the needles raindrops are formed. The tank is 5 meters above the target area. This height is important as it takes 4.3m for drops to reach terminal velocity (i.e. where the air resistance on the droplet equals gravity and the drop falls at a constant speed). At terminal velocity a drop has maximum energy status and this energy determines the force that the droplet can exert on a spray deposit on a leaf.

Five meters below the tank Eureka!’s simulator has a slow moving, variable speed conveyor belt. Potted plants or trays of soil are placed onto the 1m wide belt and these move through the rain at a predetermined speed. The speed determines the rainfall (mm) that the pots will receive. The massive number of needles (droplet formers) means that each pot is typically impacted by at least 600 drops resulting in the delivery of a highly precise amount of rain per pot. 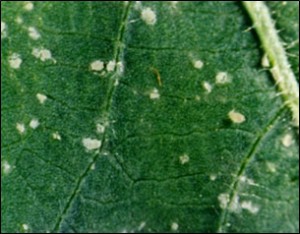 Figure 1. Microscope photo of a dried spray deposit of a WDG on a cotton leaf. Note how vulnerable the particulates would be to wash off rainfall.

When a spray droplet dries the product that it carried generally forms a deposit. In the case of particulate products (eg. SC, WP, WDG) their deposits contain the active ingredient particles. For non-particulate product (eg. ECs, SLs, EWs) the deposit usually consists of crystals of theactive ingredient. Particles generally adhere quite weakly to the leaf surface and can be readily washed off by rain (see Fig. 1).

There are various ways to reduce the chance of the product being washed of a leaf surface. These include: more rapid transportation of the active through the leaf surface, spreading the droplet out over a larger area or binding the particles to the leaf surface. 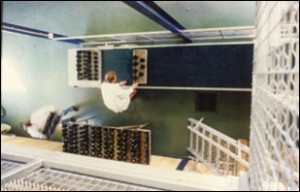 Eureka!’s rainfall simulator. Photo taken from the header tank 5m above the rain target zone. Note: the operator has placed 7 potted plants on the conveyor belt which will move through the rain zone at a pre-determined speed.

To prove these products or spray tank additives will improve rainfastness they need to be tested under controlled conditions.

Eureka!’s rainfall simulator is excellent for rainfast tests and produces results that are much less variable than field trials. Firstly, plants are grown in pots, window boxes and turf sods in trays. The surface of the leaf has a dramatic effect on rainfastness. For instance waxy leaves with thick cuticles can be harder for products to penetrate. The type and thickness of wax in a leaf cuticle depends on its growing conditions.  Generally, the harsher the growing conditions the thicker the cuticle.

Consequently, it is important that plants used for rain fastness studies are exposed to the wind, dust and sunlight. 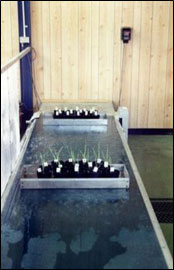 Potted plants on the conveyor moving through the rain zone

Eureka! doesn’t just use the rainfall simulator for rain fastness experiments. It is also used to study, soil wetters, leaching, incorporation of soil applied herbicides by rainfall or irrigation, rain resistance of baits, the wash off of both insecticides from surfaces like concrete and fungicides from fruit.

A large proportion of the commercial products that advertise improved performance after rain have been developed or tested by Eureka! and a lot of the publicity photos too. I doubt that any other company in this part of the world knowns more about rain fastness than we do.

If you would like products tested for rainfastness please Anthony Flynn