What is bulk packaging of agchem products doing to product quality?

The use of bulk packaging has exploded in broadacre agriculture in Australia. 1,000 L IBCs and 110 L mini bulk container are being used for on-farm convenience, container management or for a better price. But what do these bulk containers do to the stability of products that were initially designed for 10 L or 20 L containers?

Before a product can be registered in Australia it has to pass a battery of tests to prove that it will remain usable after being on the shelf for two years. These tests are international standards that were designed in the 1970s and 80s for pack sizes up to 20L. They are definitely not designed for bulk packs.

Bulk packs have caused a number of highly relevant changes. They can’t be shaken up as can small packs. Product is pumped from the bottom of the container rather than being poured out of the top and not all of the bottle ends up in the one tank load. One IBC is typically used for 5–20 spray tank loads.

Mathew Nemaric, one of Eureka!’s specialist formulation chemists, explained to me how this new use pattern dramatically changes product stability risk.

“In the past, when a product had separated into layers or particles had settled onto the bottom the problem could be improved by shaking the bottle”, he said. He went on to say that, “then the whole of the bottle’s contents would be poured into a single tank. At least then the spray operator knew that all of the bottle’s ingredients were in the tank.”

Few people know that, in IBCs of some fungicide the concentration of a.i. in the bottom 10% of the shuttle can be up to five times the concentration that is in the top 10%. In the worst cases we have tested there was no a.i. at all in the top 10% of a container. As IBCs are pumped from the bottom, product layering makes it almost impossible for spray operators to apply a consistent amount of a.i. from one tank load to the next. This variability not only leads to over or under dosing but to potential resistance problems.

The increased risk from bulk packaging depends on the formulation type, for instance soluble liquids like glyphosate hardly suffer at all from being in an IBC. When asked what the solution was Mathew replied that it was being tackled in different ways by different companies, “one major company seems to have responded by increasing the viscosity (thickness) of their products. This can help a lot but it can be a headache for users as it makes pumping and pouring a lot harder. Another major company seems to have moved to finer particle size. This also helps but adds costs that can’t be sustained for many products. Either way these companies are doing something to address the problem. By comparison there are many cheap products that have no protective measures whatsoever! It’s our opinion that very few manufacturers even know about this problem.” 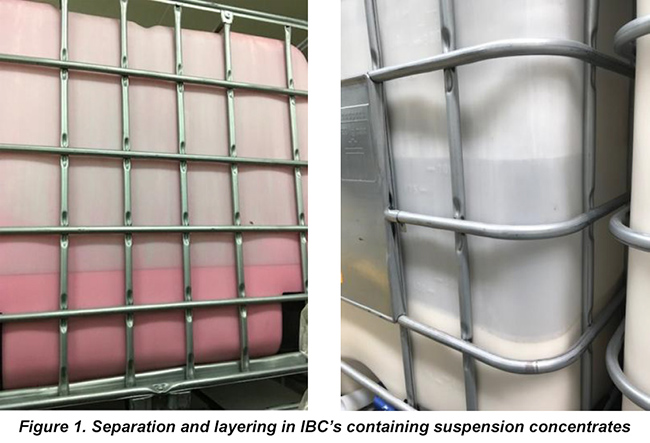 I finished by asking Mathew what Eureka! is doing to help? He replied, “we have been studying this problem for a long time and now understand the risks better than just about anyone else. We use a number of strategies, these include smaller particle size and using the most sophisticated viscosity modifiers but we have also designed new tests. We use these tests to identify whether the products we develop are at risk from bulk container problems. If they are then we reformulate to remove this risk. That way operators using products developed by Eureka! are better protected.”