Trifluralin – How it really works Part 2

In Part 1 of this series we explained how:

In this article we will review how soil type and soil pH affects the efficacy of trifluralin.

Please note that the scientific methods used in the experiments described here are too lengthy for this article.  Please contact me if you want more information on these studies.

Soil types used in studies
The studies reported in this article were conducted on four soil types collected from fields in Australia’s wheat belt (Table 1).

This study compared the emergence of annual ryegrass from two soils that had a very similar pH but very different texture – an alkaline sand and an alkaline clay.  Ten rates of trifluralin were sprayed onto the soils in eight replicates of 5cm deep plastic punnets.  The trifluralin was left on the soil surface for; 0, 2, 24 or 48 hours before being thoroughly incorporated.  After all treatments had been incorporated the pots were sown with non-herbicide resistant, annual ryegrass and moved to a temperature controlled greenhouse.

Results and Discussion
Table 2 summarises data from the dose response curves and is presented as the ED50 (the Effective Dose that reduced the emergence by 50%) and the calculated trifluralin lost.

Table 2. Effect of soil type and time to incorporation on the ED50 of annual ryegrass emergence and trifluralin loss. Soils were an alkaline clay and an alkaline sand. Percent trifluralin loss is based on dose response analysis, data was not included in this article.

There was much less volatilisation from the clay with 39% of the trifluralin being lost from the clay in 48 hours compared to 62% from the sand.

The alkaline clay had an organic carbon content of 2.2% compared with 0.6% for the sand (Table 1).  It is not surprising therefore that volatility was less from the soil with the greater amount of organic matter.

There is still speculation as to why, when the chemical is incorporated thoroughly into the soil immediately after spraying, the efficacy of trifluralin is lower in sandy soils compared to clay soils.  The general consensus is that the sandy soils continue to lose more trifluralin through volatilisation from their surface after incorporation than clay soils but we have not seen proof of this.

Effect of soil pH on trifluralin efficacy and volatilisation losses
This study compared the effect of 10 rates of trifluralin on the emergence of annual ryegrass from three soils.  Two of the soils had very similar texture but different pHs – an alkaline sand, with an acidic sand.  The third soil was an acidic loam.

The proportion of sand:silt:clay and organic matter content of the two sandy soils was very similar while the pH of the acidic loam and the acidic sand were very similar (Table 1).

After the trifluralin was applied it remained on the soil surface for; 0, 2, 24 or 48 hours before being thoroughly incorporated.  After the soil for all treatments had been incorporated the pots were sown with annual ryegrass and moved to a greenhouse. 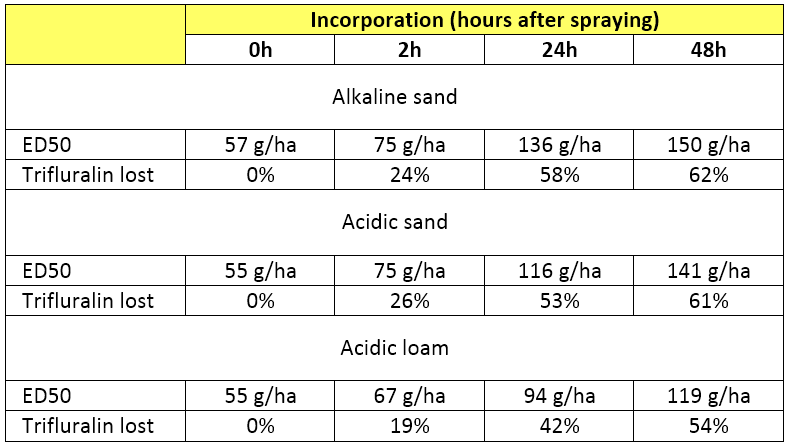 Table 3. Effect of pH and soil type and time to incorporation on the ED50 of annual ryegrass emergence and trifluralin loss. Soils were; an acidic sand, an alkaline sand and an acidic loam.

Results and Discussion
Table 3 summarises data taken from the dose response curve analysis.  Efficacy is presented as the ED50 (the Effective Dose that reduced the emergence by 50%) and the present trifluralin lost was calculated from the curves (graphs not included here).

When the trifluralin was incorporated immediately after application the efficacy on ryegrass was similar for all three soils (See ED50 in Table 3).

Volatilisation was similar in the alkaline and acidic sands with 61-62% being lost when there was 48 hours without incorporation.  Comparatively, the loam, which had the higher organic matter content, lost 54% to volatilisation over 48 hours.

In our articles next month we will look at what effect; (i) the age of organic matter and (ii) rainfall have on the performance of trifluralin.