Trifluralin – How it really works Part 1

Trifluralin is one of the most widely used herbicides in Australia.  Despite it being in use since the 1970s, it is surprising how many myths exist around how it works.  Eureka! has conducted dozens of experiments with trifluralin.  Over the next couple of newsletters I will share some of our findings with you.  In this article I will cover how trifluralin kills weeds, its movement through the soil as a gas, where it is absorbed into the plant and the proportion that is lost to volatilisation and UV degradation.  Please note that the scientific methods used in the experiments described here are too lengthy for this article.  If you want more information on them please contact me.

Mode of Action
Simplistically, as roots grow, the cells immediately behind the root cap divide, the plant pumps these new cells full of fluid causing them to expand and drive the root through the soil.

Trifluralin is a member of the dinitroanaline family.  These chemicals inhibit the division of cells at the root tip.  Without cell division, the roots stop growing and the weed’s growth grinds to a halt.

How efficiently does trifluralin move through the soil as a gas?
Trifluralin’s ability to move through the soil as a gas is well known but how far can it move and how does this affect its efficacy?  A soil with good structure is honeycombed with pores many of which are interconnecting.  Gases can move through these pores, which is how roots access oxygen.  Oxygen gas movement is largely driven by a concentration gradient and, as 21% of air at the soil surface is oxygen, this gradient is very steep.  By comparison, 3L/ha of a trifluralin 480 delivers just 0.15g trifluralin active ingredient (a.i.) spread over each m2.  Trifluralin might be considered volatile by pesticide standards with a vapour pressure of 6mPa but what does this mean?  By comparison, petrol has a vapour pressure of 10 million mPa and water is 2-3 million! So trifluralin isn’t all that volatile.

So how far can trifluralin gas move through soil?  The study reported below measured how far trifluralin moved as a gas through columns of dry, alkaline, sandy soil when kept in an oven at four temperatures for 48 hours. 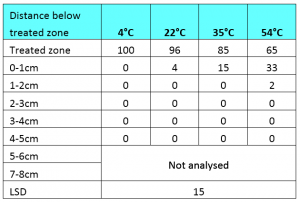 Results and Discussion
This test was close to a best case scenario for trifluralin movement as the soil was dry (water can plug up soil pores) and contained minimal clay or organic matter (soil components that bind trifluralin).  Despite this there was no significant movement of the trifluralin at temperatures up to 22°C (normal, autumn, soil temperatures).  At 35°C there was significant gas movement (15%) into the adjacent soil column segment and at 54°C this movement had increased to 35%.  At 54°C trifluralin was measured beyond the adjacent 1cm wide segment proving that it had moved more than 1cm.  However, this soil temperature was far higher than what would occur in field conditions (Table 1).

A droplet of trifluralin EC dries on soil to form tiny trifluralin crystals. These are mixed with the soil by incorporation.  The crystals produce a vapour of trifluralin around them which slowly disperses into the pores of the surrounding soil.  It will continue to disperse away from the source until the concentration gradient is no longer sufficient to drive the trifluralin molecules further.

Our results indicate that, under normal conditions, trifluralin gas moves millimetres rather than centimetres in the soil.  This demonstrates how critical it is to have even spray coverage and good soil incorporation if trifluralin is to control every weed seedling.

What part of the weed takes up trifluralin?
In this study, soil treated with various concentrations of trifluralin was banded either above or below wild oat and annual ryegrass seeds.  This allowed an estimate of the relative ability of trifluralin to inhibit weed growth when absorbed either through the roots or the coleoptile.

Results and Discussion
On average, 3-4 times as much trifluralin needed to come in contact with the coleoptile compared to the roots to cause the same damage.  Trifluralin is far more effective at controlling weeds when it is in the root zone but some chemical is still absorbed through the coleoptile.  This is different to triallate, another well-known, pre-emergent herbicide.

How much trifluralin is lost to volatility?
It is well known that the efficacy of trifluralin left on the surface of the soil, and not incorporated, will decline over time.  Most people believe that this is a combination of evaporation and ultra violet (UV) degradation. Eureka! has conducted a large number of experiments to determine the factors causing this loss.  The study reported below compared the emergence of annual ryegrass from an alkaline, sandy soil in 5cm deep punnets, treated with a range of trifluralin rates.  The trifluralin was left on the soil surface for 2, 24 or 48 hours before being thoroughly incorporated.  The punnets were kept in a shed (where neither UV light nor wind could have an affect) for the first 48 hours while the trifluralin was on the soil surface.  After the soil for all treatments had been incorporated the pots were sown with annual ryegrass and moved to a greenhouse. 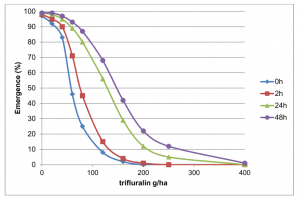 Figure 1. Effect of time until incorporation and trifluralin application rate on mean emergence of annual ryegrass (of 25 seeds sown), in an alkaline, sandy soil.

Figure 1 is a dose response curve fitted to the data showing the effect of time until soil incorporation and trifluralin application rate on seedling emergence.  Table 2 is a comparison of the curves at ED50 (the Effective Dose that reduced the emergence by 50%).

Volatilisation caused considerable loss in efficacy as it fell by 62% when incorporation was delayed for 48 hours after trifluralin application.  The rate of volatile loss declined rapidly over time.

Table 2. ED50 and trifluralin loss with time to incorporation on an alkaline, sandy soil.

Volatility losses can be very severe where trifluralin is left on the surface.

Table 3. ED50 and trifluralin loss with UV exposure and time until incorporation, on an alkaline sandy soil.

How much trifluralin is lost to UV Degradation?
The design of the study reported below was similar to that of volatility (above) except that the sprayed pots were kept outdoors for eight hours.  Treatments receiving UV were exposed to full sunlight in summer on a fine, hot, sunny day (maximum temperature of 31°C, daily solar exposure of 33.0MJM3).  There was little or no wind (0 to 4kph).  Treatments not receiving UV had shade cloth fixed 1.6m above the punnets.  The shade cloth claimed to block more than 98% of the UV. 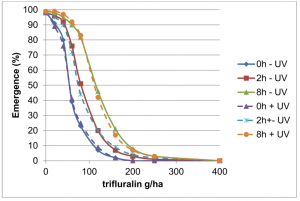 Figure 2. Effect on time until incorporation, trifluralin application rate (g/ha) and UV exposure on the mean emergence of annual ryegrass (of 25 seeds sown), in an alkaline sandy soil.

Results and Discussion
Eight hours of sunlight on a day of high UV radiation in December did not significantly reduce the efficacy of trifluralin (Table 3, Fig 2).  There was substantial volatilisation with 52-53% of the trifluralin being lost during eight hours on the soil surface.  However, there was no significant additional loss from exposure to the UV radiation.

Next month we will look at more factors that influence the performance of trifluralin.