Glyphosate and the Effect of Hard Water

Effect of hard water on glyphosate efficacy
Glyphosate is manufactured as an acid but is converted to various salt forms to improve its solubility in water.  When dissolved in water in a spray tank these salts form positive and negatively charged ions.  Under most conditions the glyphosate ion has a net charge of minus two  (-2). 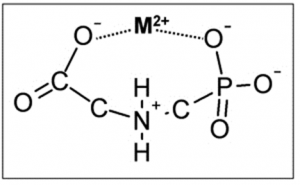 Figure 1. A metal ion (designated M2+), such as calcium, binds to two negative charges on a glyphosate molecule (Courtesy of the University of Nebraska – Lincoln).

The staff at Eureka! have been experimenting with glyphosate and hard water for more than 20 years and have accumulated a good understanding of their interaction.

Eureka! conducted a greenhouse study to compare the effect of 9 rates of a well-known brand of glyphosate 450 SL prepared in water of varying hardness on annual ryegrass.  The spray mixes were prepared with Melbourne tap water (which is renowned for its softness) that had been modified to give four concentrations of hardness; tap water (32ppm hardness), 330ppm, 1,000ppm and 3,000ppm.   Eight replicates, each containing two tillering, annual ryegrass plants, were sprayed at nine rates of glyphosate and harvested two weeks later.

Results and Discussion
A dose response analysis was used to evaluate the fresh weight data from all treatments.  Figure 2 summarises data from these curves, including the ED50 (the Effective Dose that reduced the biomass of ryegrass by 50%).  Table 1 also shows the calculated loss in glyphosate efficacy.

Table 1. Comparison of the ED50 and efficacy loss of a glyphosate 450 SL applied in water of various hardness on annual ryegrass. 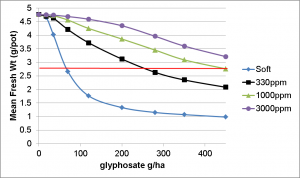 Figure 2. Effect of hard water and application rate on the efficacy of glyphosate 450 on annual ryegrass.

Sulphate of ammonia and glyphosate efficacy in hard water
Ammonium sulphate is an excellent treatment for hard water problems with glyphosate.  It is sometimes incorrectly referred to as a chelating agent.  Whereas chelating agents “mop up” ions, ammonium sulphate mainly works by releasing sufficient ammonium ions into the tank to overwhelm the effect of the calcium and magnesium ions (Figure 3).  The glyphosate salt then has far more ammonium ions to bind with than calcium or magnesium ions.  Ammonium glyphosate is a desirable structure for glyphosate in terms of its herbicidal activity.  It is very soluble and is more quickly absorbed into the plant than other glyphosate salts. However, in hard water it is possible to have more calcium and magnesium ions than a standard rate of ammonium sulphate can overcome.

Figure 3. If sufficient ammonium ions are dissolved in water they can overwhelm the calcium and magnesium ions in the hard water forming the efficacious ammonium glyphosate. The sulphate ions can also bind with the calcium, magnesium and even iron ions causing them to precipitate in the tank, further protecting the glyphosate but increasing the risk of filter residues (Courtesy of the University of Nebraska – Lincoln).

Results and Discussion
As above, dose response analysis including the ED50 was used to evaluate fresh weights of annual ryegrass 2 weeks after glyphosate treatment (Figure 4).  Glyphosate efficacy loss (%) is shown in Table 2.

The rate of glyphosate active ingredient required for a 50% reduction in annual ryegrass biomass was 69 g a.i. in tap water and 501 g a.i. in 1,000ppm hard water.  With the addition of ammonium sulphate to the 1,000ppm water the ED50 fell to 77 g a.i./ha.  This was not significantly different (P<0.05) than the efficacy in soft water without ammonium sulphate.

However, at 3,000ppm hard water the same rate of ammonium sulphate was not sufficient to completely protect the glyphosate from the hard water ions and the efficacy was still 62% below that of the soft water. 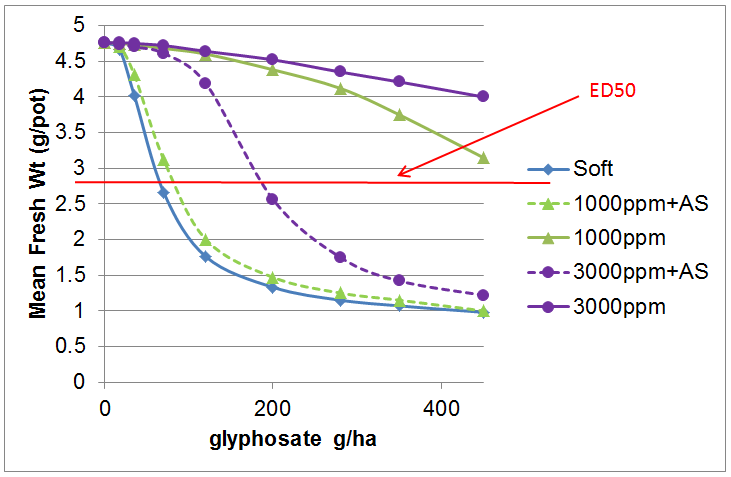 Figure 4. Effect of hard water, application rate and ammonium sulphate (AS) addition on the efficacy of glyphosate 450 SL on annual ryegrass. ED50 allows the treatments to be compared when they have reduced the maximum fresh weight of annual ryegrass by 50%

Table 2. Comparison of the ED50 and efficacy loss of a glyphosate 450 SL applied, with or without ammonium sulphate, in soft, 1,000ppm or 3,000ppm hard water on annual ryegrass.

Iron versus Calcium and Magnesium
In some parts of Australia hard water can also contain iron ions.  Unfortunately, ammonium sulphate is not as effective in preventing efficacy losses with iron as it is with calcium and magnesium.

Fertilisers
Some fertilisers have a similar effect on glyphosate as hard water, while others act more like ammonium sulphate.  Fertilisers such as copper and zinc sulphates are an example of problems.  These ions bind strongly to glyphosate and are applied in sufficient concentrations to overwhelm ammonium sulphate, especially as water hardness also increases.

Liquid fertilisers that contain ammonium are widely used in Australia and they can reduce the effect of hard water.  However, they tend to have a pH around seven which is a problem for glyphosate.  We will discuss the reasons why in a future article.