Last year, a new knockdown, ready-to-use (RTU) product entered the home garden market with much fanfare and the promise to cause visual results within an hour.   Having tested many home garden products that have made wild claims we were sceptical – but we were wrong!

At Eureka!, we have considerable knowledge and excellent facilities to test product for use in home gardens.  I interviewed Liam Flynn, a Project Manager at Eureka!, about the studies that Eureka! has conducted on this new product and how it stacked up against its own claims.

Liam explained that, “Australia’s home garden herbicide market has been dominated by the reliable, broad spectrum herbicide glyphosate.  Gardeners are familiar with its benefits and its high success rate on both grass and broadleaf weeds.  However, glyphosate takes hours to be absorbed by the weeds, and depending on weather and soil conditions, weeks until the weeds show damage and die.  Many gardeners are concerned about this delay and this leads to product complaints.”

I asked Liam how this new product manages to show action on weeds so quickly?  He responded that, “this new product contains two herbicide active ingredients, a higher than normal glyphosate concentration (16 g glyphosate acid/L compared to the more traditional 7.2g glyphosate acid/L for RTUs) plus nonanoic acid (also known as pelargonic acid).    Nonanoic acid is an organic fatty acid that has been used as a herbicide for decades.  The new product combines these active ingredients and under the right conditions it gives excellent results.  There was already a similar product on the market that first appeared in 2009, but its label only claims action within 12 hours.”

How does nonanoic acid work?

Nonanoic acid is a fatty acid that burns weeds on contact by breaking down their protective leaf cuticle.  Liam explained that, “nonanoic acid has potential as a herbicide on its own by causing weeds to desiccate.  Stubborn weeds often grow back from this treatment, but when it is applied in combination with glyphosate the mix of fast acting nonanoic acid and slow, but sure acting glyphosate, results in reliable weed control”.

What did Eureka! find when it tested these products?

“Eureka! has undertaken a suite of experiments on these nonanoic acid plus glyphosate combination herbicides”, said Liam, “ and interestingly their performance differs greatly when applied in hot, sunny conditions compared to when it is cold and moist”.  He went on to say, “for example, we conducted a trial on a hot sunny day in December; on healthy annual ryegrass, prickly lettuce, variegated thistle, barnyard grass and sub clover.  This was a good test as these are five major weeds that infest gardens across Australia.  The trial compared the new product with a traditional generic glyphosate RTU”.

Liam continued, “the results were very impressive.  As expected, after four hours we got almost no damage from the generic glyphosate RTU. Although it did go on to kill all of the weeds over the next few weeks.  The new nonanoic + glyphosate product started to work within minutes.  Damage from the nonanoic + glyphosate product was evident on all five weed species within just 30 minutes and all plants had damage to 100% of their foliage within four hours.  In this and other experiments we have noticed variation in the rate of on-set of damage between different species.  For instance, subclover is particularly sensitive while variegated thistle is less so”.

Figure.2 shows the visual effect of the new nonanoic + glyphosate RTU compared to an untreated control and a generic glyphosate RTU at two hours after application.  The plants in the front row of pots are clearly damaged (wilting and turning brown) while those in the other two rows are healthy. 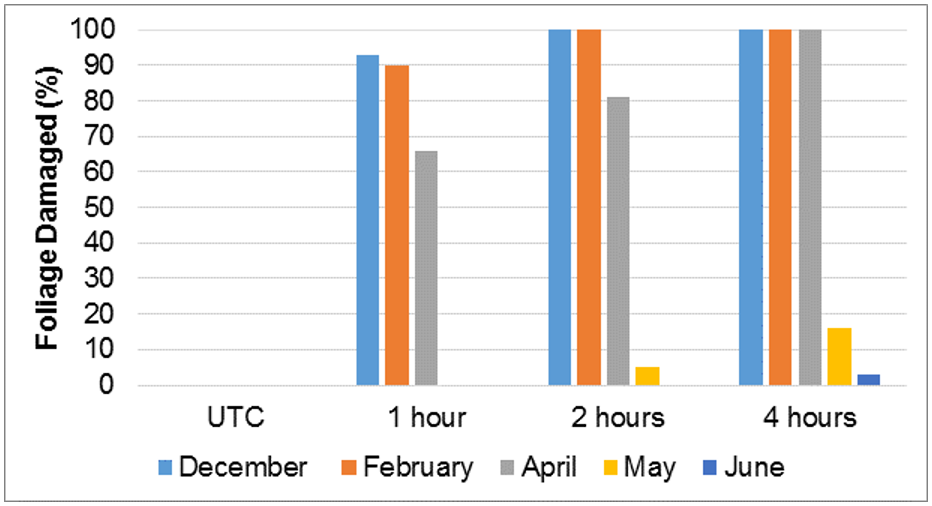 Figure 3. Comparison of the rate of onset of symptoms (in hours after spraying) from a 16 g glyphosate acid (gly) + 21 g nonanoic acid RTU at different times of the year. The UTC is an untreated control.

Liam explained that the speed of activity for the new product seems to be related to temperature and sunlight.  “We conducted a series of experiments from December to June on similar size subclover on the rural fringe in Melbourne’s south west.  We sprayed at 10:00am and noted the temperature and weather conditions including the amount of sunlight.  The results are presented in Figure 3.  We found that the rate of onset of visible symptoms declined with a drop in temperature and sunlight.  On an overcast, cold June day we had very few symptoms even after four hours, although the weeds did eventually die”.

Liam concluded by saying, “these nonanoic acid plus glyphosate products are slow to act in cold weather in winter but the weeds are growing slowly then too.  Most gardeners are going to be spraying these products during the sunny, warmer months when the weeds are growing rapidly.  Under those conditions we would expect the damage to progress rapidly.  However, we would be suggesting that gardeners don’t spray late in the day as daylight is an important factor for the rate of damage”.

Distributors are always interested in new data about the products they stock.
If you have products that you would like tested by our highly experienced team, please contact the friendly Eureka! AgResearch team on (03) 9369 4177 or if calling from NZ +61 39369 4177, and ask for Anthony Flynn.